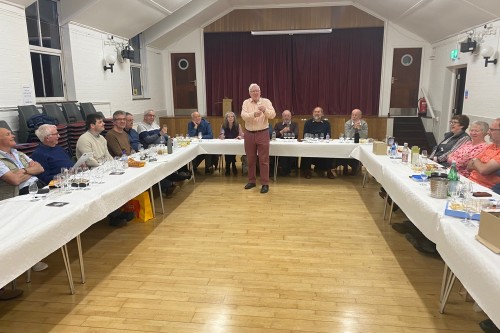 I have written elsewhere about my fascination with success, and the multitude of factors that have to come together to achieve it. Perhaps harder to define is just what is success, especially when we consider an individual. Is it being a master of one's art, being popular, making money or being comfortable with oneself?

These thoughts were much in my mind when I recently prepared for and presented a tasting for the Hextable Wine Society in tribute to the late, great wine educator, Richard Bost. Richard was not only a friend, but a professional wine educator who I admired for his skills, knowledge and passion. He was a popular speaker at events held by many wine societies, as evidenced by having a diary as full as he wished, and the feedback received. Now, I say the following with caution: there are several wine writers, well-known names and in the 'first division,' who are accomplished wordsmiths but who are lacking in presentation skills and have an audience at a tutored tasting dozing between wines. Richard was not a writer - he was a dedicated wine educator with a sparkle in his eye and the ability to both weave a tale and take his audience on a journey. I miss you Richard, as a friend and colleague, and the wine world is emptier without you.

When choosing wines to present at his tribute tasting, I was keen to show those from countries, regions and producers close to Richard's heart. He was a passionate promoter of 'emerging' regions and countries. With this in mind I wanted to show a couple of wines from Turkey. I knew that I had to include Romania, and wines from his beloved producer: The Iconic Estate. Richard was a friend and admirer of its chief winemaker: Lorena Deaconu, who has that rare ability of producing both really good wines at inexpensive price points and outstanding wines that are really affordable. I could easily have also chosen Lebanon ,Greece Slovenia, Croatia, or even Thailand, but I rightly anticipated that my audience were not that keen in tasting wines from India again. Portugal, a country that Richard visited frequently, but still undervalued and underrated, had to be included. And of course, I wanted to show a couple of Proseccos. Richard was so impressed by how this region came from nowhere to be the UK's and North America's Number 1 sparkling wine. Some 500 million bottles of Prosecco are now produced each year! 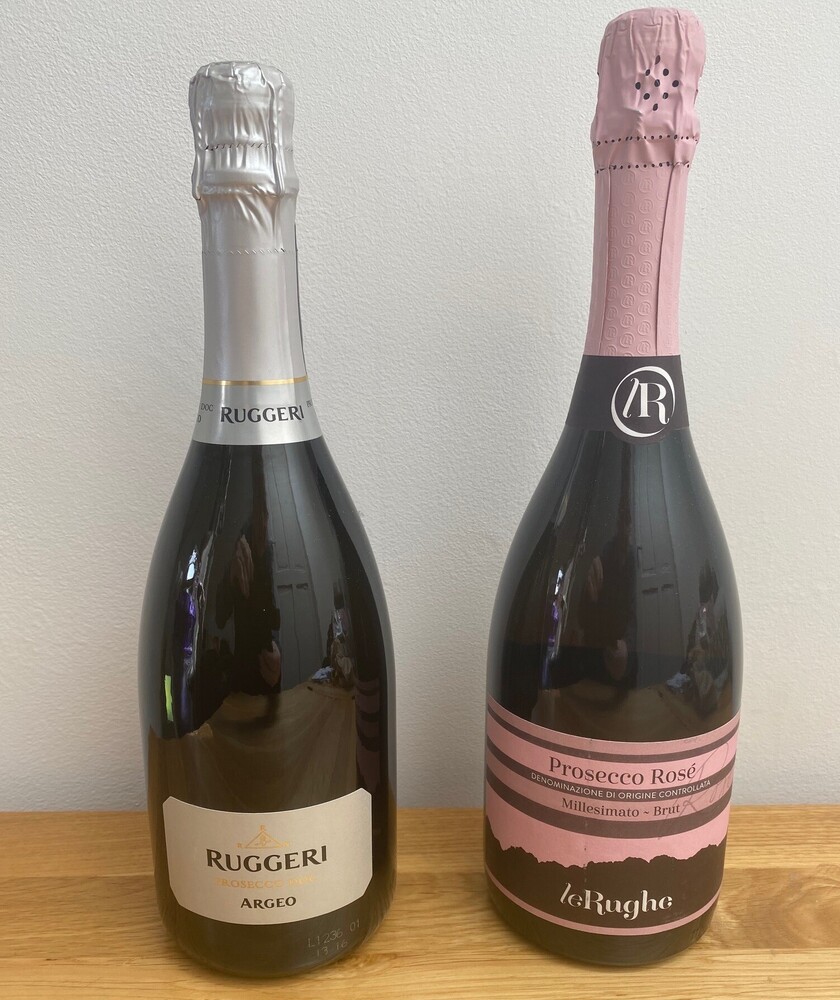 We began the evening by raising a toast in Richard's memory with: PROSECCO DOC BRUT - RUGGERI 'ARGEO', available from The Great Wine Company. This lovely wine from the foot of the Dolomites is rich in primary fruit, with notes of banana, fresh peach and a little fleshy yellow apple. It's lively yet delicate; it's zingy and fun. Indeed all things Prosecco. Ruggeri, and Villa Sandi were perhaps Richard's two favorite Prosecco houses, so it was great to include this wine in his honour.

The second wine was 2020 PROSECCO ROSÉ DOC BRUT - LE RUGHE 'MILLESIMATO', available from beverage-boys.com. Rosé Prosecco is a relatively new category, only authorised in October 2020. This wine looks delightful with a gorgeous, vibrant salmon-pink colour. The nose is of fragrant roses, with some overtones of alpine strawberries. It is a blend of 85% Glera and 15% Pinot Nero, (Pinot Noir) which gives both colour and lovely strawberry flavours. There are also cherry overtones. With just 6 grammes of residual sugar, the wine is drier than many Rosé Champagnes. A real delight. 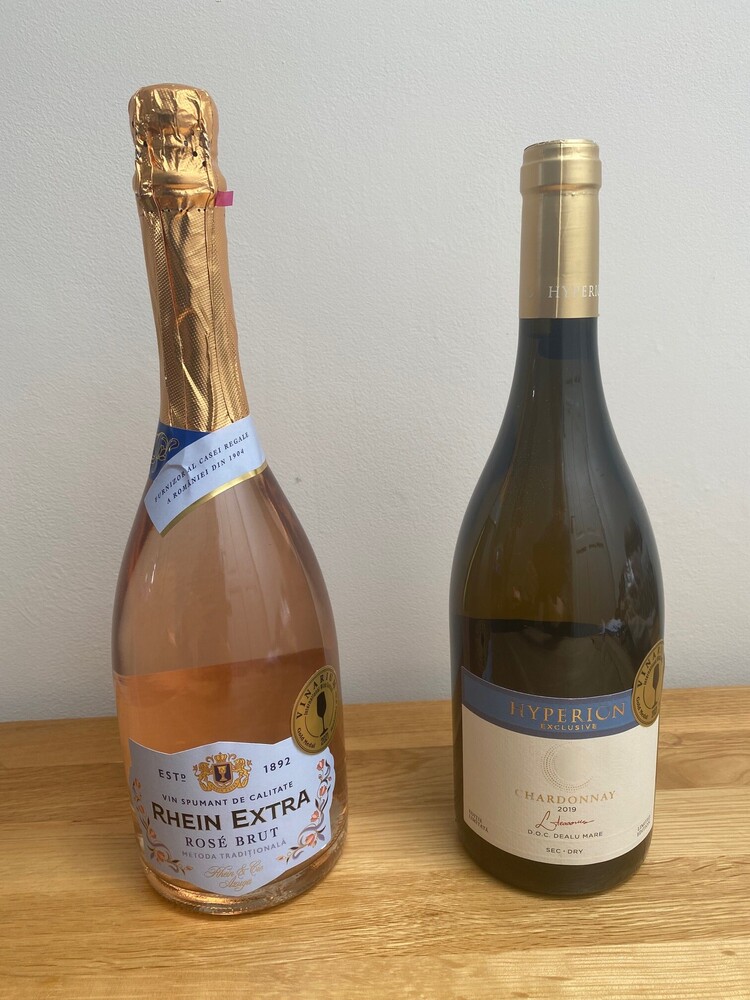 The two wines from Richard's beloved Iconic Estate in Romania showed so well.

RHEIN EXTRA ROSÉ BRUT - METODA TRADITIONALĂ - THE ICONIC ESTATE. This rosé sparkler is from the cellar of Rhein & Cie, based in the small town of Azuga, located between Sinaia and Brasov in Romania's Prahova Valley. This about 850 miles east of the Prosecco region, but a million miles away in style. It undergoes a second fermentation in bottle, in the same manner as Champagne and top quality English sparkling wines. Now Prosecco is very much about primary fruit aromas and flavours, but in this wine we have a bridge between these and the characteristics of autolysis, that come from ageing on the lees following bottle fermentation. The wine is 100% Pinot Noir, and has lovely strawberry fruit aromas with a beautiful rose-petal fragrance. This really is a great sparkler with massive appeal. The Rhein Cellars (named after the founder) have been making bottle fermented sparkling wines since 1892!

2019 HYPERION EXCLUSIVE CHARDONNAY 'LIMITED EDITION' - DELU MARE DOC -THE ICONIC ESTATE. The production is tiny - less than 7000 bottles! This is a 'hand-made' wine, that is aged for 12 months in oak. Now this Chardonnay shows real class. It has classic melon aromas, overlaid with pineapple and mango notes. There is a very gentle superstructure of oak. The palate shows almonds and other nuts, with some oak spices, and a creamy texture. The wine is rich perfectly balanced. The finish is oh so long. Lorena and her team recommend this with slow cooked Guinea fowl with almond butter under the skin and root vegetables. I can't wait!

Thank you to Lorena Deaconu, Crina Iosif and The Iconic Estate for sponsoring these wines

The other still wine tasted was a white from the lush (read wet) north of Portugal: 2020 VINHO VERDE DOC - AZEVEDO. Vinho Verde has had something of a mixed history in the UK, but the quality today is generally high. This wine, from the giant Sogrape, is made from the Loureiro and Alvarinho varieties. It was fairly well received, but a little dull. Some of the participants observed that it was lacking the crisp, fresh, zingy characteristics (often with a hint of sprtiz), traditionally associated with Vinho Verde. I noted that the bottles were sealed with a Saranex closure - to my mind Saran-tin would have kept the wine fresher. 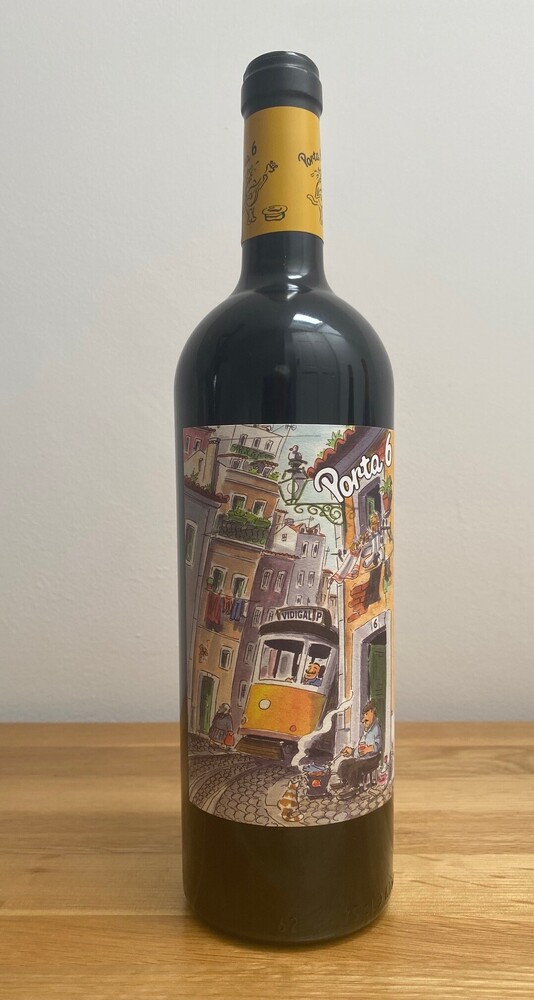 As well as appreciating the complexity and class of fine wines, Richard was always keen on value for money, and fresh fruit-driven reds. There can be no better example than 2020 PORTA 6 VINHO REGIONAL LISBOA - VIDIGAL WINES. The blend is 50% Aragonez, 40% Castelão and 10% Touriga Nacional. I love the quirky label, depicting a house in Lisbon 'No. 6'. It is painted by the eccentric German Hauke Vagt, who is somewhat hard to reach - has no mobile phone! However, this wine is widely available in supermarkets, which is great as it is so modern, juicy fruity and enjoyable! 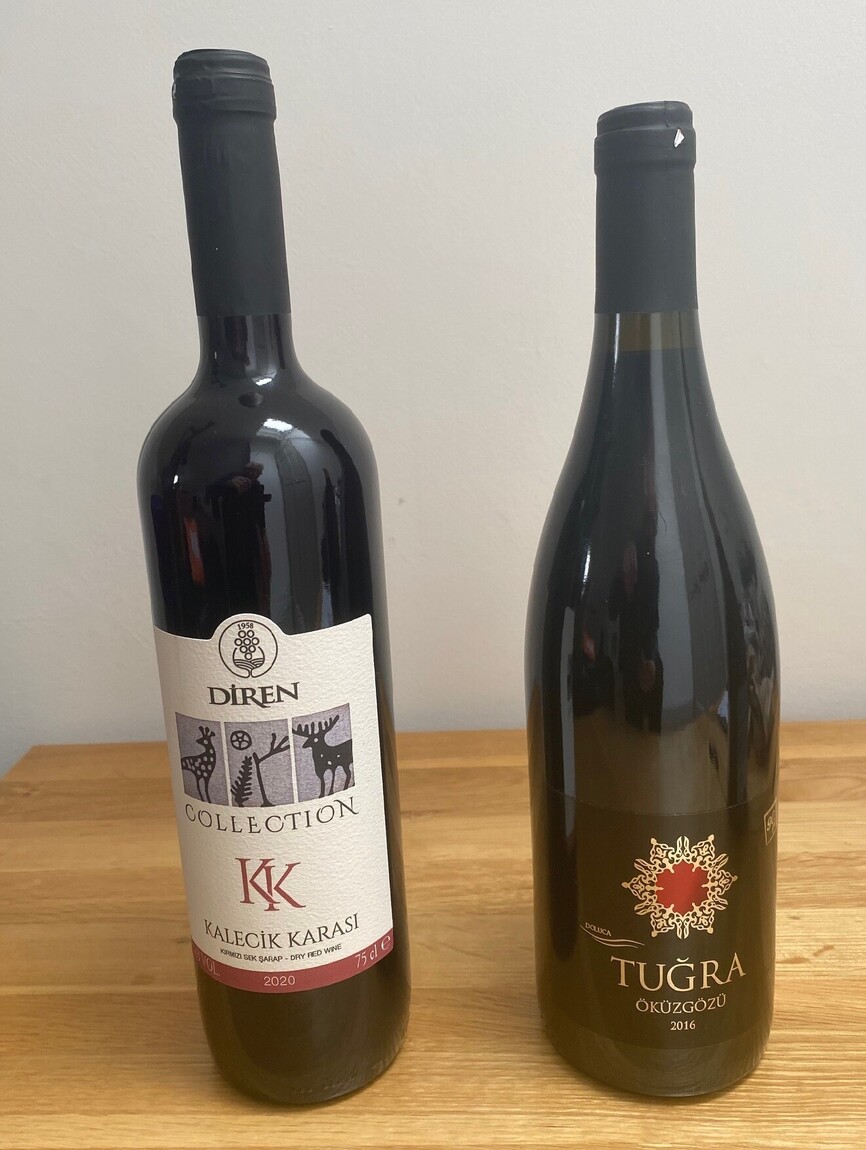 Like Richard, I have every admiration for the companies and people who make wine in Turkey. Let me simply say that the politics and systems are against them, yet they have come from nowhere just 20 years ago to producing some world class wines today. For my two wines I chose indigenous grape varieties:

2020 DIREN COLLECTION KALECIK KARASI - DENIZLI
Kalecik Karasi is a dark-skinned variety, but the wines produces are light to medium in colour and body. This wine f has a hint of Syrah and Bogazkere, another indigenous Turkish variety to add a little spice to the flavours of mulberries and plums. A great wine for Kofte, or indeed any lamb dish.

2016 DOLUCA TUĞRA OKŰZGŐZŰ - DENIZLI. Öküzgözü. which translates to bull's eye, is one of the most interesting indigenous varietals of Anatolia. The variety has quite a strong acidity but is balanced by its ripe fruit flavours. The grapes are from low yielding vineyards in Denizli and harvested in early October before the potential alcohol goes through the roof. The wine is made using pre-fermentation cold soaking and cool fermentation which bring the aromatics to the fore, without the extraction of hard tannins. This wine was matured in French oak for 8 months, the first four of these being on the lees. The sensory profile is fascinating, with lots of primary aromas including a melange of red berry fruits together with sour cherries and plums. A really classy example. 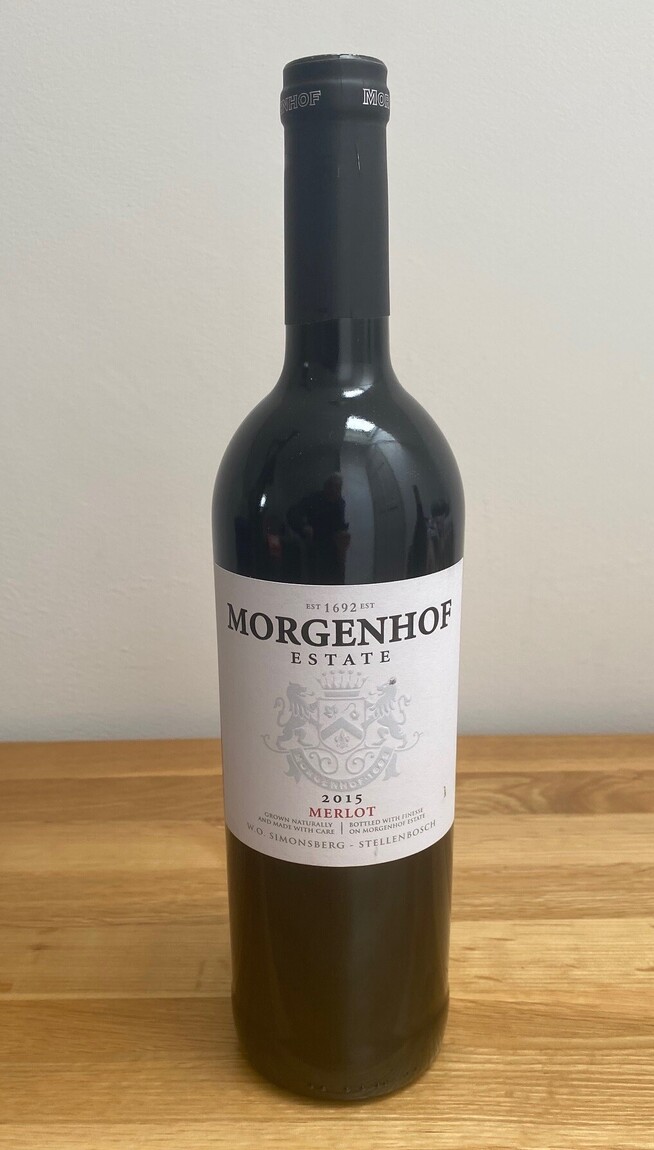 The final wine of the evening was 2015 MORGENHOF MERLOT - W.O. SIMONSBERG STELLENBOSCH. This underrated and undervalued estate has long produced some truly excellent wines, particularly Chenin Blanc and Merlot. It was owned until 2021 by Anne-Marie Cointreau - her siblings own Frapin Cognac, Gosset Champagne, Admirable family Vineyards in Malibu and the Gourmand organisation, which organises awards and fairs for books focusing on food and drinks. Under Anne-Marie's reign attention was paid to every detail. This Merlot is a stunning wine, available from Waitrose cellar for just £15.99 - a fraction of its worth. Rich, opulent and really complex- with flavours of blackberries, leather, chocolate, and a hundred and one spices. The wine is a bridge be tween the old and new worlds, between Africa and France. A truly appropriate wine to conclude this tribute to Richard Bost. 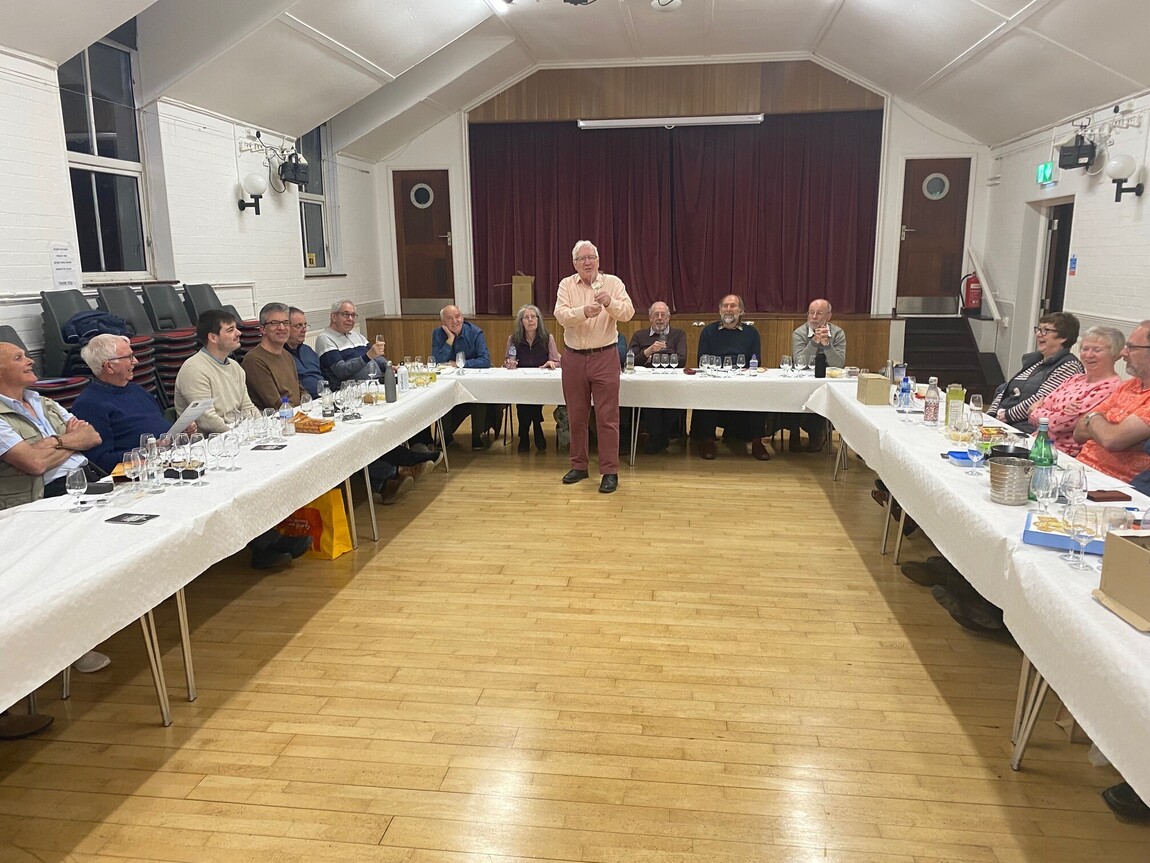